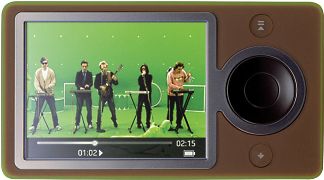 Microsoft has just launched the Zune, which will be one of the most popular digital music players ever made, and could have been considered a wild success as a result. Instead, the device has been inevitably and irrevocably compared to Apple’s iPod, and thus anything less than becoming a cultural icon will be considered failure. There are a couple of reasons why, and a number of lessons to be learned.

Back in January, I described a list of Dos and Don’t for Beating the iPod and iTunes. You can refer back to it if you want the whole list, but here’s some key points:

Microsoft has done a good job of achieving many of these goals, while still making an overall experience that’s strangely unsatifying. To me, this is epitomized by one fact: ** There’s a brown Zune**.

In person, the device has a rich, warm color. The green tinge is innovative; I’ve never seen a consumer electronics device that tries for such a complicated, organic palette, and it’s pulled off wonderfully. But instead of calling the color chocolate, or something else compelling and attractive, they named it brown, a color that has few positive associations except (possibly) UPS. Chocolate is desirable, and fuels passions. It’s even a little bit sinful. Hell, you could play on the brown and green theme and call the color “tree”.

But no, the color name is prosaic. And worse, it’s a color combination that looks terrible on the web. There should be some kind of Photoshop Gizmodo filter where you can take a photo of a device and see how it’ll look in a spy photo on a gadget blog — that’s where first impressions by early adopters and the press are going to be formed.

The failure of Brown represents a more profound problem with the Zune: A lack of vision. There’s unquestionably a lot of talent and ambition evidenced in launching a product of this scope and breadth with a small team on a short timeframe. And the Zune team should be commended for pulling it off with such high quality. But the overriding feeling of the Zune is an almost pathological me-too-ism, as if the team weren’t watching consumers or potential customers, but was too busy saying Hello From Seattle to those who were Made In Cupertino. Instead of aiming at the competition, the team should have been aiming for the lead.

There are lots of great things about the Zune, and I hope it does well. But my skepticism and frustration over the fact that they settled for being compared unfavorably to the iPod is best summarized by this commercial I’ve mocked up. It shows what I think Christmas morning will look like if you leave a Zune under the tree for the kids.