Daniel Lyons, author of the heretofore-anonymous Fake Steve Jobs blog, which comments extensively on companies in the technology industry, was also the author of Forbes’ November 2005 cover story “Attack of the Blogs”, a 3000-word screed vilifying anonymous bloggers who comment on companies in the technology industry. In 2005, I spoke to Lyons for the article, though the comments I made about both the efforts that have been made to encourage accountability in the blogopshere, as well as the many positive benefits that businesses have accrued from blogging, were omitted from the story.
My initial temptation was to mark Lyons as a hypocrite. Upon reflection, it seems there’s a more profound lesson: The benefits of blogging for one’s career or business are so profound that they were even able to persuade a dedicated detractor.
First, some background. Attack of the Blogs attracted a good deal of blogosphere attention when it was originally published; It’s difficult to overemphasize exactly how strident and one-sided the piece is. Some excerpts to give you a sense of the tone:

Web logs are the prized platform of an online lynch mob spouting liberty but spewing lies, libel and invective. Their potent allies in this pursuit include Google and Yahoo.
…
The online haters have formidable allies amplifying their tirades to a potential worldwide audience of 900 million: Google, Yahoo and Microsoft, plus a raft of other blog hosts. Google is the largest player; its Blogger.com site attracts 15 million visitors a month, more than each of the Web sites of the New York Times, USAToday and the Washington Post. An upstart, Six Apart in SanFrancisco, owns three blogging services–TypePad, LiveJournal and Movable Type–that together run a strong second to Google.

With that mention of my employer, I have to begin the disclaimers. I obviously have a vested interest in preventing people from maligning blogs — much of my career, and indeed the bulk of the work of my adult life, has been in helping promote opportunities around things like blogs. In addition, I spent a good deal of time on the phone with Lyons for the story, expressing in detail the steps my company had taken to encourage responsible blogging, and instead saw the second paragraph I quoted above, which implies that we somehow benefit from providing services to “online haters”. 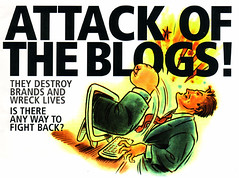 (To those who’d snipe that I’m only upset I didn’t get quoted — I don’t have any interest in getting quoted in lazy, sensationalistic stories. And my points of view were more than adequately voiced by peers I respect, such as Jason Goldman and Frank Shaw.)
The deliberate antagonism of the story was especially frustrating to me because Six Apart, more than any other company involved in blogging, has taken its lumps for its advocacy and efforts around accountability and responsibility. We’d been taken to task years ago by the old-school blogging community for efforts like TypeKey, which provided authentication tools, and were derided by both bloggers and the media for encouraging any accountability for the tone and content of bloggers’ words. At the same time, we’ve been maligned by stories like the Forbes cover for apparently not doing enough to encourage accountability, though I do take some pride (and offer a final disclaimer) in the fact that we host Forbes’ blogs on our TypePad service, that Forbes offers the option of using TypeKey to authenticate comments, and that the content of the Forbes blogs is generally excellent.
The useful content of blogs like Forbes’ highlights a particularly interesting bit of intellectual dishonesty in the original Attack of the Blogs story. Many of the examples of the most extreme negative behavior come from sources such as Yahoo message boards postings, vituperative emails, even abusive phone calls. Not to put to fine a point on it, but none of these are blogs.
So, should Forbes simply retract the story and issue a correction? Maybe so. Because the most dramatic oversight in the piece was that Forbes neglected its own editorial mission. I am by no means an advocate or supporter of the unalloyed capitalism that seems to be advocated by the magazine’s editorial ideology, but I do think it’s a position held in good faith, and so I can respect it. But Forbes professes to be an advocate for businesses and entrepreneurs, and by presenting blogs and blogging as a threat, instead of as the single most powerful new tool for improving business communications, the magazine does its target audience a profound disservice.
Which brings us to Fake Steve Jobs. There’s no question Dan Lyons does great work under his pseudonym. The blog itself is a must-read, and the canny way the author’s true identity has been managed was exceptionally effective at making the blog a breakout success. Since the New York Times outed Lyons, Forbes itself has wasted no time in claiming both the author and the blog as its own.
But the techniques and opportunities created by the success of FSJ illustrate perfectly the flaws in the original Attack of the Blogs story. The immediacy and extremely wide distribution of a blog make it possible to reach a large audience in a very short period of time. The blogosphere’s lightning-paced mechanisms for promotion and amplification let the site attract buzz and attention from far outside of its core geek audience. The influence and connections of blog readers got the blog attention from the likes of Bill Gates, and yes, even (the real) Steve Jobs himself less than a year after its launch. And the business value generated was so obvious that Forbes.com compromised on its usually-staid editorial voice in order to include Fake Steve as part of its stable of blogs. And the blog was even hosted by the very same Google that “allied” itself with the “online lynch mobs”, and will join those hosted by us who “operate with government-sanctioned impunity”.
Blogs are such a good business tool that Forbes has given its most valuable editorial promotion to announce their adoption of one. This, from the magazine whose cover touted that “They Destroy Brands and Wreck Lives”.
It makes sense to close with a quote from the story whose creation perhaps inspired Lyons to rethink his view on blogs after he’d completed it.

Google and the like argue they bear no more responsibility for content than a phone company does for slander over its wires. But Google’s blog business looks less like a phone company and more like a mix of reality TV and an online magazine. Bloggers provide the fare, and Google maintains it for them free of charge, sometimes selling ads.
Google says ad revenue isn’t the point. The real aim is “to let users embrace the Web as a medium of self-expression,” a spokesman says. Google lets them run wild.

Dan, aren’t you glad you got to run wild?
Some related links: