I try to keep my social network as open as possible. Here’s the thing — I’m not talking about web applications that mimic real-world behaviors. I mean the real world. The people I befriend, collaborate with, and share ideas with are not constrained by the companies that they belong to, or the tools they choose to use. That’s how I like it.
Case in point? From the outside, it seems like peple come and people go and sometimes, people come back to working at companies. In my experience, it ends up being that those with good ideas end up putting their heads together, regardless of where their butts are sitting. 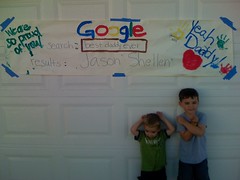 I was reminded of that recently by reading about the end of Jason Shellen’s time at Google. I like this guy Jason — he’s smart and funny, two traits that go a long way. And when he and I both started working with the founders of blogging companies to try and help out on the business side of things, we were the only two people in the world doing that kind of work. It’s been five years or so since then, and we’ve bumped into each other at countless conferences and events and even at each other’s offices over the years. One time we went down to crash one of his birthday parties with his family and all their kids. (It’s well worth it — these kids know how to make some heart-wrenchingly sweet signs.)
But if you didn’t know us, it probably looked like we’ve been competitors all these years. Someone who didn’t know us would say “man, those guys must hate each other”. Being on the inside, you realize that you’d be an idiot to hate the only other person who really understands what you do.
All of this is a long-winded way of saying, I don’t care if your paychecks are cut by Larry and Sergey or Ben and Mena or Manny, Moe and Jack if you’ve got something to contribute. Especially if you’ve got a vision. And I can’t think of a better vision to laud than Brad’s Thoughts on the Social Graph. It is, appropriately, a plan for opening up social networks; It’s not so much a collection of thoughts as it is a manifesto. And two of the most creative, innovative friends I know are both working on it. Brad Fitzpatrick is, of course, not merely a hacker or a creator, but truly an inventor. As long as we all have open access to the things he builds, I’m an admirer and a fan for life. And David Recordon (congrats on that Open Source Award! You didn’t even have to write any code!) has already proven he knows how to build momentum on the sort of efforts that would be unimaginably ambitious to so many others.
Now I just hope everybody else who hacks on these things has the same desire to have an open social network, and realizes how intrinsically valuable such a thing can be. And I hope that those who are newer to social media familiarize themselves with the history of social media, where people acted like supportive contributors, collaborators, and even friends. Fingers crossed.