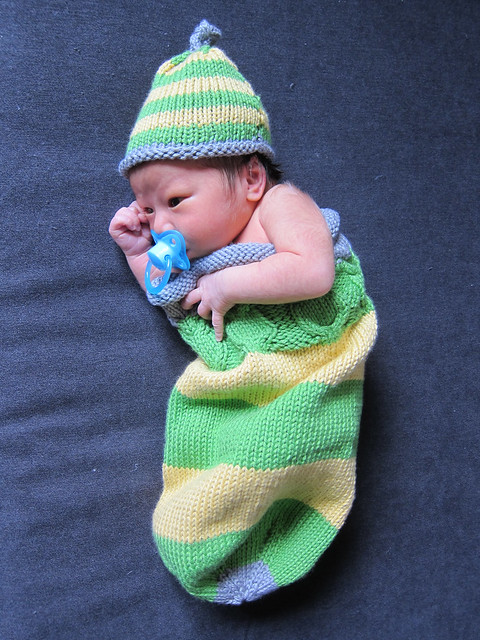 The days (and yes, the nights) over this last week or so have been a blur, but one thing that’s crystal clear, beside his abiding cuteness, is that this boy is the best thing I’ve ever been a part of, and this is the happiest I’ve ever been in my life. My wife Alaina was amazing during the pregnancy and during a long and arduous delivery, and even more so in the days since his birth, as she’s recovered while being the center of Malcolm’s life around the clock. Malcolm is a smart, bright, phenomenally miscegenated half-Indian, quarter-Chinese, 100% American boy who already seems to be a little bit of a smartass, and I couldn’t be more proud.

But of course, all of these mundane details of my boy’s life are in some ways profoundly ordinary, and that’s perhaps one of the best parts of the whole thing.

Having a kid is truly the most universal experience one can go through; Everybody was born sometime, in some place. We talk about these things with our family and close friends as if they’re the most important moments in our lives, and they are. But when a child is born in some other part of the planet, or in some culture that we’re not connected to, it’s the most boring thing in the world. I felt the same when when I got married, “Though this was the most personal thing I’ve ever been through, it’s one of the few events so universal that almost everyone understands it.”

And that’s perhaps the part of the whole process of becoming a parent that’s been most profound for me. As life-changing, and amazing, and terrifying, and rewarding and emotionally overwhelming as having a child has been for our little family, somebody’s doing it again right now, and will do it again a minute from now, or has been doing it a minute ago, every moment. For a million years. The biggest, most impressive, most moving, thing that we can probably ever experience as humans is so ubiquitous that it doesn’t even register. I love this!

The Wall Of Parenthood

Perhaps part of the reason this delight in being a parent was a bit of a surprise to me is because parenting, just like marriage, has terrible PR. First, the common descriptions of it in media are essentially either endless complaints (“How do we get our kid to eat her vegetables?!”) or endless recitations of privilege (“These childless people won’t get out of the way of our double-wide SUV-sized stroller!”). Neither of these are particularly compelling examples of a goal I’d want to aspire to. Second, there’s an incredibly opaque wall between parents and the childless, even amongst the childless who are married or in a committed relationship and interested in having kids. I know the old stereotype is that people with kids don’t socialize with those who don’t have them, but I didn’t realize it extended all the way to communications overall, where some fundamental concepts about parenthood are simply never shared with those who aren’t in the club.

Perhaps most obviously, many narratives about having children are written from some weird “I’ve just always dreamed of becoming a mother and realizing my true moon goddessness” perspective that sounds insufferable or ridiculous to someone like me who just likes the idea of becoming a dad. I’m not on some vision quest, I’m just raising a boy and building a family and don’t want to screw it up too badly.

And finally, simply becoming a parent can be brutally difficult. Outside of depressing, single-topic infertility websites, there’s no regular conversation about how extremely common it is to either encounter painful difficulties or complete inabilities to have children. Worse than the pain of that for those who go through it is the inexplicable and brutal habit that we have in our culture of pretty much enforcing and expecting silence from those going through problems with getting or staying pregnant.

All of these factors add up to make the road to parenthood seem impossible and otherworldly. It’s as if it were something that either requires superhuman abilities or is the exclusive province of spoiled jerks. I’m really sincerely hoping that there’s a way to just be a regular person who has happy kids, and in the true I-tried-this-for-a-week-so-I’m-an-expert-fashion that the Internet loves, thus far that’s been the case.

And What About The Internet?

One of the best things about expecting Malcolm was that it was something I hadn’t shared with the Internet. It wasn’t a secret; All of my friends and family knew fully well that Alaina was expecting, and that he was a boy. But I’ve given over a large part of my personal identity to the internet representation of myself, and I’ve enjoyed having something important and wonderful that wasn’t up for discussion on Twitter or Facebook. That’s not to say I am not enjoying sharing Malcolm’s birth with the world here, but just that having some degree of control over his privacy is really satisfying.

In the days since his birth, the sheer outpouring of support, advice, kind thoughts, and unabashed love for my boy that we’ve gotten online has made me as proud that he’ll be part of my online community as I am that he’ll be part of his community here in New York City. If it takes a village to raise him, that village is half in NYC and half online, just as I’d hoped. Plus, it’s a kick just to see how man people are willing to follow @malcolmdash on Twitter.

But you know, don’t worry. I don’t think this will become a parenting blog or anything; It’ll just now also be informed by the experience I get from being a father.

I’ve always known that I’m incredibly fortunate. But having a son has reinforced it in a million ways. My boy is our only child, born in a high-tech skyscraper in one of the wealthiest cities that’s ever existed, with excellent prenatal care, readily available vaccines and medicines, ample nutritious food, and top-notch medical attention. As a simple point of contrast, my own father was born one of fourteen of his mother’s pregnancies that came to term with essentially no prenatal medical care, no running water, no electricity, no telephone, no modern vaccines and what little public health education and resources were available to an independent princely state under colonial British India. I’m the sole generation separating my father from my son, and all I see every day is the evidence of how my life’s privilege has already given my son opportunities that even someone as brilliant as my own father can barely imagine.

And recognizing that I could provide the opportunity for my son to become someone who makes a positive difference in the world was one of the main reasons I was excited to become a parent in the first place. Because honestly, in a world with so many injustices, where so many go without the resources they need, I had misgivings for many years about whether it was even a moral decision to have children at all. Let’s face it, most people who have children while living in Manhattan are obnoxious, spoiled brats and make their children even worse examples of those traits. I’ve never been a person who unquestioningly thought “love, marriage, kids” even though those all ended up being choices I’ve made in my life.

But commitment, I understand. Doing really hard challenging things, I understand. Trying to let go of my ego enough to focus my energies and attentions and ambitions on someone other than myself, I’m starting to understand. My son has already taught me a little bit of how to be a better husband. Like all newborns, he also offers profound lessons in patience and perspective, at any hour of the day or night.

And those are just the first wonderful and wise things that Malcolm’s teaching me. I’m just lucky I get to be one of the first people whom he’ll teach in his life. I love you, little man.