This morning, I was extraordinarily excited to get to witness Mayor Bloomberg and our city’s new Chief Digital Office Rachel Sterne unveil New York City’s “Road Map for the Digital City”. It’s an extraordinary document, and as someone who loves the web, civic engagement, public infrastructure and New York City, it feels like a momentous accomplishment, even though it marks the beginning of a years-long process, not just the end of a months-long one.

But the single biggest lesson I got from the 65-page, 11.8mb PDF is a simple one: The greatest city in the world can take shared public spaces online as seriously as it takes its public spaces in the physical world.
As you’d expect, there’s a press release about the Digital Road Map, but more reassuringly, the document demonstrates the idea of the web as public space throughout, making the idea explicit on page 43:

Maintaining digital ‘public spaces’ such as nyc.gov or 311 Online is equally important as maintaining physical public spaces like Prospect Park or the New York Public Library. Both digital and physical should be welcoming, accessible, cared for, and easy to navigate. Both must provide value to New Yorkers. And for both, regular stewardship and improvements are a necessity.

Why is that declaration so promising? Well for me, it goes back to the post that I wrote last September 11th:

[T]his is, in many ways, a golden era in the entire history of New York City.
Over the four hundred years it’s taken for this city to evolve into its current form, there’s never been a better time to walk down the street. … {I]n less than half a decade, the public park where I got married went from a place where I often felt uncomfortable at noontime to one that I wanted to bring together my closest friends and family on the best day of my life. We still struggle with radical inequality, but more people interact with people from broadly different social classes and cultures every day in New York than any other place in America, and possibly than in any other city in the world.
And all of this happened, by choice, in the years since the attacks. We didn’t withdraw, we didn’t say “we can’t build bike lanes because the terrorists will use them”, we didn’t abandon our subways en masse because we feared some theoretical attack that might strike us there. It could just have easily gone the other way. Many predicted an exodus from New York City after the attacks, with our once-proud citizenry retreating to the theoretically-safer environs of smaller towns or lesser cities. It didn’t happen. …
We have not conceded our public places or our shared spaces where we marry and play, eat and dance, walk and shop, or just sit quietly by ourselves. Maybe it seems like a small thing, but it’s a beautiful and meaningful and brave thing, and I am nothing but thankful for those who’ve made the choices to enable this evolution of our city. And I hope that making New York more livable for those of us who are here is an appropriate, albeit humble, tribute.

So the New York City you see today is the safest, most vibrant, most livable version of the city that’s ever existed because we’ve invested in making it so. And at a time when the web is in danger from an array of forces that match the social pressures that nearly tore New York City apart in the 70s, seeing a city seriously invest in treating the web as a valuable public space for its citizens is both provocative and inspiring. 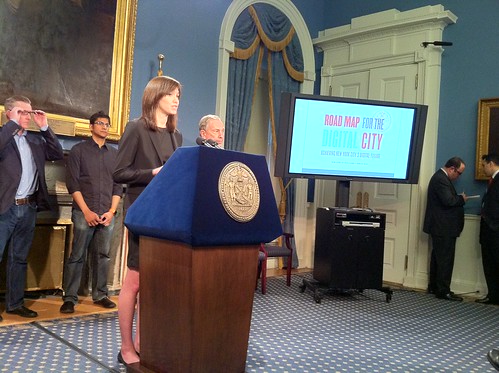 Now, any plan of this scale is necessarily going to have some vague parts. But a few highlights really jumped out at me: