Jack asked us for ideas on how to fix Twitter. A coherent plan for fixing Twitter would make millions of people happier, and pick up a billion dollars in market cap along the way. C’mon, it’ll be great!

Listen, it’s almost 2017, so it’s absurd to still be writing “how to save Twitter” thinkpieces. But I’m an eternal optimist, a fan of Twitter right from the start (no seriously, it says so on the company blog) and I don’t have time to go fix Twitter since I’m busy with my new job at Fog Creek now. So, Jack: I’ll give you this one for free, just because I still have a soft spot in my heart for the product and I really want us all to stop having to rescue Twitter in 2017.

1. Show the world you can ship consistently

Open-letter advice articles like this Medium piece are usually particularly insufferable because they presume that a big company full of smart people couldn’t think of improvements that one random Internet dude spewed out in a few minutes. I don’t think that smart people at Twitter haven’t thought of these ideas: I’m merely emphasizing that nobody on the outside can tell if they did or not. So you have to ship. You have to launch new features, tell users what they are, and explain why you made them.

Everything depends on this. I know you make little updates to the Twitter apps, and are doing tests all the time on features that you try out for different groups of users. But almost nobody believes Twitter has the ability to launch meaningful new features on a consistent basis. The last “big” launch you did was Moments, and while it may be performing for new users, it was massively underwhelming for engaged users, and perception matters as much as metrics. Your most enthusiastic users haven’t seen anything significant in ages.

By contrast, it feels like Instagram or Facebook ship something new every other week, and Google throws so much shit up against the wall nobody can even pay attention to it all. Without trusting that you can iterate on your product, nobody will believe you can solve any of the other problems listed here.

Yeah, I know, you hear this one a lot. This is still the biggest fundamental issue. And yes, it’s a hard problem—even if you solve obvious and hyper-visible issues like the way women, especially women of color, are targeted on the English-speaking communities of Twitter, that wouldn’t fix complex issues like LGBT teens having their lives imperiled by being outed in Saudi Arabia. I know your Safety team’s intentions are good and that their responses have been improving. But Twitter’s apparent understanding of the threat model is often broken; solutions like blocking only make sense if the problem is one that goes away by ignoring it, not if it’s a threat that needs to be monitored.

This is one of the rare areas where you shouldn’t just show, you should tell: Explain loudly and clearly that you don’t want organized mobs of attackers on your site. Make sure features like quoting tweets aren’t being abused by people who set others up as targets. Fighting these large-scale attacks matters even more than banning individual bad actors. Harassment mobs like the alt-right already think you’re censoring them, so you might as well make their dreams come true. When they ask, you’ll have an answer:

Your relationship with Wall Street investors (and, to some degree, with advertisers) is fundamentally broken because you’ve gotten trapped into using the wrong metrics to measure the success or progress of Twitter. New signups are flat, and they’re going to stay flat, and every desperate flailing attempt to change that just reminds engaged users that they’re not seeing any progress and they don’t believe you can ship features they care about. Meanwhile, do you know how many new video creators joined YouTube this quarter? Me neither! You know why? Because all the good videos are on YouTube! What percentage of people who visit YouTube each month are logged in? What percentage ever uploaded a video? Answer: Nobody gives a shit. Because YouTube inarguably drives culture, and people (and advertisers!) want to be part of that.

Similarly, when Trump destroys the planet with more rambling, incoherent abusive gibberish, nobody is going to ask, “Did he say it on Tumblr?” Because Twitter is the place that popular culture gets created and discussed! I’m not happy about the fact that Twitter helped Trump get elected, but it makes it damned obvious that investors watching your signup numbers have thoroughly missed the point. Change the metrics, change the story, take the reins and lead them into a better understanding of the world than whatever meager measurements they got obsessed with in 2009.

Only a tiny percentage of YouTube users make videos, but YouTube’s outdoor advertising features those creators and works to make stars of them. The unique creativity on that platform is what defines it, in both the mind of users and creators. By contrast, even though some of the ads are very pretty and the overall execution is striking, Twitter’s outdoor advertising seems much more incoherent, because it’s promoting… #Putin?

Your ads should feature voices and creators and ideas that are unique to Twitter, and while hashtags fit the bill, Putin certainly doesn’t. It would make more sense to promote the fun and ridiculous joke hashtags that trend on their own every night, since those are unique to Twitter. We can get Putin anywhere.

Right now, it feels like Twitter is chasing video because there’s lots of money in TV and you want some. You know why all that money went to TV? Because it was the only place to see the creative people and ideas that were shaping culture. That’s a huge part of Twitter’s role today; just own it.

4. Understand your different users, and serve them differently

A few years ago, I wrote about being verified and getting a blue checkmark on Twitter. A lot of people are absolutely obsessed with what it means to be “Twitter famous”, but there’s also probably nothing on the platform that’s more alienating and divisive than the blue checkmark. You know why? Because Twitter can’t decide what the hell the checkmark means.

I know, I know, the stated policy is that the blue checkmark only signifies that someone is actually who they purport to be. That way, when there’s a blue checkmark on a white supremacist’s account, you know they’re a genuine Nazi. Here’s the thing, though: having a verified account also gives users access to a set of filtering and management features for their mentions. That’s got nothing to do with verifying identity. Add to that the fact that some verified accounts have almost no followers and no concerns about impersonation, while some hugely popular accounts on Twitter aren’t verified, and it becomes clear that there’s no consistent internal policy on the meaning of the status.

It’s not just verification—Twitter clearly places special value on celebrities and well-known voices across the platform. That’s reasonable! They help make Twitter an interesting place to hang out. The introduction of specialized apps like Dashboard and Engage are a good step toward accommodating power users on the platform. But it makes no sense that these tools aren’t promoted to every enthusiastic user on the platform, instead of just #brands and celebrities.

Again, look to YouTube: They’ve made a Creator Studio that, while overly complex, provides a great set of tools to people who want to make awesome things on the platform. The only people who get rich tools from Twitter are advertisers and people who get famous outside of Twitter. It’s time for a more coherent strategy:

In general, Twitter functionality needs to be organized by those who will make use of it, rather than internal divisions about who is an influencer and who is an advertiser and who is just a poor schmuck who happens to love Twitter. 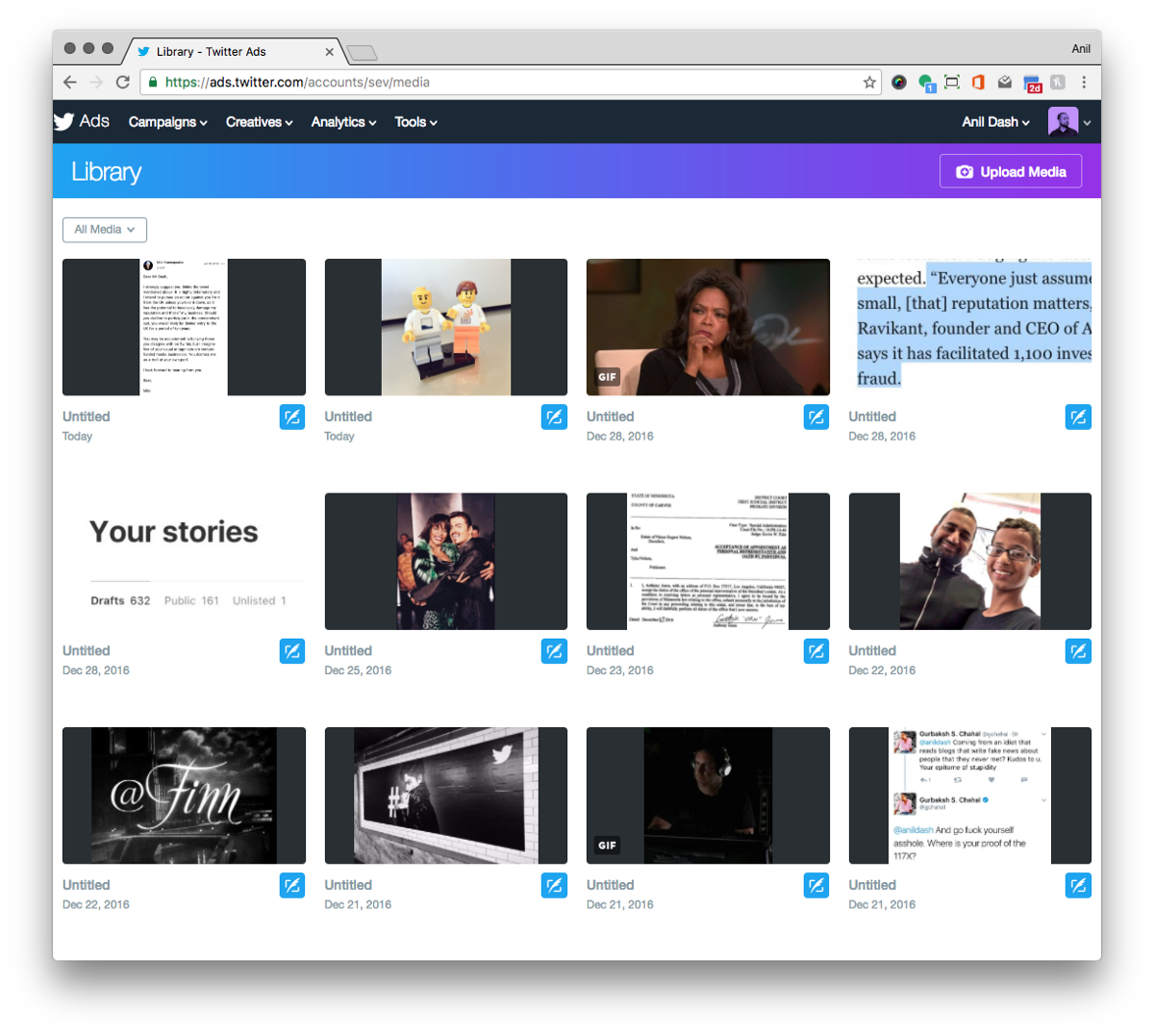 5. Get your shit together for developers and bots

Do you know why I have my cool new job heading up Fog Creek? One reason is because I’m super excited about working with a talented team to make meaningful products. The other reason is because my last startup depended on the Twitter API, and as a result, that product no longer exists.

That sucks. We bet that Twitter wanted to help interesting new products be built on top of its platform, and despite all the problems in the past, I got my hopes up when you directly acknowledged those issues (even mentioning me by name!) at your developer conference:

Twitter hasn’t had a developer conference since. The only big platforms being built around Twitter are marketing analytics. Meanwhile, the entire rest of the industry lost its mind with excitement over bots, a market that Twitter used to completely dominate, and Twitter’s APIs were nowhere to be seen.

When we launched Glitch, we built tools to let anybody build a bot (I’m still hoping tons of people remix their own Twitter bots!) but it was shocking to see how much developers were wary of doing anything with Twitter. Twitter went from the place that developers used to say “Hello, world” with their new creations to being a total non-entity.

Despite all the this bad blood with developers, it still wouldn’t be too late for Twitter to embrace being a great bot platform, and a great Internet of Things platform, and to appeal to both Will.I.Am the rapper and Will.I.Am the creator of wearables. Boom Boom Pow. But it comes back to that first point: You gotta ship.

The truth is, these kinds of requests to a publicly-traded company are ridiculous. When they’re sincere, they read like besotted fan-fiction about a corporate entity. When they’re strident, they read like the condescending and superficial rant of an unbearable egotist. And sure, I could just email you or some of the folks on the board and send a note, but well… that wouldn’t be right for Twitter.

I don’t presume that anything I mention here is a new idea, or even that these suggestions are particularly novel. I also know these ideas can add a lot to Twitter’s valuation, but honestly I don’t give a shit about that; it just makes a useful hook to get reluctant readers to take a look.

Honestly, it’s a lot more personal. There are a lot of reasons Twitter still matters to me, and to a lot of us. It’s the last bastion of the old era of blogging or social media that still has huge cultural relevance. It’s the last big company to at least give lip service to some of the values of the web we lost. We idealize Twitter despite its egregious flaws because it still has glints of the best parts of the Internet. But the worst of Twitter has crossed the line into overshadowing the best of Twitter for many people, and if we learn from past social platforms, that kind of phenomenon often reaches a tipping point. Sometimes it feels like Twitter-the-product is fighting a losing battle against Twitter-the-company.

You still have lots of creative people who care enough about Twitter to fix what’s wrong, both inside the company and outside. Now it’s time to do justice to all the energy that’s been expended.

And finally, thanks for asking, and for listening.

thanks for the work and time spent here. Reading thinking and considering. I agree with most of your point!