I don’t believe in life insurance. When I die, I want it to be a bad day for everybody. – Brad L. Graham, February 2002

My friend Brad L. Graham died unexpectedly last week, at only 41. It’s hard to sum up someone so loved in a few words, but I wanted to say a bit about him because he had a profound effect on my life and on the lives of many of my closest friends. In short, Brad showed us that when we do something creative, we’re not just making art, we’re making connections to a real community.

Truth is, Brad and I didn’t spend all that much time together in person. Over the past decade, we’d catch up once or twice a year, grabbing coffee one afternoon in San Francisco, stumbling into a diner in Austin at three in the morning, going out to a nice dinner in Chicago on a blustery evening. But he was a constant presence in my life online, and influenced the way that so many of us fundamentally view the online world.

If you look at Brad’s venerable blog The Bradlands, it looks pretty ordinary. Sure, it’s been around longer than most (Brad started blogging in 1998). And his April Fool’s Day jokes were actually funny, unlike everybody else’s (Brad inspired one of my most popular blog posts ever, where I ranted that nobody else was up to his standard), but it’s otherwise unremarkable. Why, then, have dozens of people professed their love and respect for this man’s work online in threads like this one on MetaFilter?

I think the explanation finds its roots in Brad’s work in promoting theater. Brad was an eloquent and passionate advocate for the Rep in St. Louis, and a fixture in his corner of the city’s gay community. In both cases, he was able to be a powerful voice because he was so charming and persuasive in his demeanor. I already miss his ability to call almost anybody “Darlin'” while being simultaneously complete sincere and totally cheeky.

But we’re used to treating the folks who work at a theater as a community. What was surprising was that Brad brought this same sensibility to the early days of the personal web. Before the term “blog” was even coined, the distinguishing feature of the sites that a few of us were publishing was that these were made by real people, individuals with voices who had something to express. Yet the conventional wisdom was that the medium we were working in, the world we were living in, was somehow not real.

This manifested itself in a lot of different ways. Early reports on blogs would say “why are these people wasting their time shouting into the void? Who reads these things?” Even though I was participating in it myself, I would still be combative and antagonistic on my site at times, because I didn’t always see the readers or other bloggers I interacted with as “real” people.

In that era, before meetups and tweetups and mass political movements organized by bloggers, Brad recognized that not only were there real humans interacting on these sites, but that all of us who shared our thoughts online were part of a creative community every bit as legitimate and unifying as his work in theater.

And the evidence of that belief is everywhere. Over the days since Brad’s passing, amidst the heartbreak, I’ve seen literally dozens of people say, in their own words, “Brad was the first online person I ever met in real life.” In cities all over the world, in one-on-one meetups to cities he’d never visited, or in his legendarily inclusive hundreds-strong Break Bread with Brad annual drinkfest in Austin, Brad brought together people who hadn’t yet realized how they had made real, significant relationships online. A while back, I’d written about communities of creators, showing a small group of folks who were enormously and disproportionately influential in making the web more personal and social. Brad was there that night and always, more than holding his own as a peer to some of the most successful entrepreneurs on the web, even though he wasn’t even really a geek. He just liked the medium because it let him connect with other people.

With Brad, it was a matter of course that you were going to catch up if you were close by. While the rest of us always intend to get around to inviting some people to go out, Brad was disciplined about it, actually cajoling and prodding you until you showed up. He invested in connection, and for me it never showed more than just a few weeks after 9/11. He had known I was feeling really alone, with few friends here in New York to comfort me after the attacks, so he flew up while others were still too terrified to get on an airplane, while the rubble pile was still burning, and spent half a day just hanging out and being there for me. And this was essentially only the second time we’d met in person, after South by Southwest where he’d invited me to my first Break Bread with Brad six months earlier. I was no less of a real friend in need of support, simply because 99% of our conversations happened online over instant messenger or in a private web community we belonged to. 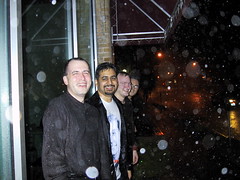 By the next spring, when a few of us got caught out in the rain during an unusually powerful sudden thunderstorm in Austin, Brad’s powers to bring people together were in full flower. The handful of us who’d been soggily sprinting through the Texas night bonded over our plight when we finally found refuge at a diner . I had noted it at the time as having learned the lesson that rain could make brothers out of strangers, and I didn’t realize quite how true that was. I’m still in touch from time to time with the guys who were at the table. One of them even stood with me at my wedding just a few years later, as I did later at his. At that wedding, the bride and groom had first met in person at Break Bread with Brad.

[Update: James McNally, who was there in the rain with us that night, and also here in the comments, pointed out that I had incorrectly placed that evening in 2002, instead of 2001 when it actually happened. Despite my memory getting foggy over the years, the error just shows that I’d already felt like Brad was an old friend just a few days after we’d met in person for the first time.]

Best of all, Brad used these formidable powers for good. At at time when the Day Without Art was at its peak of influence about the AIDS pandemic, Brad organized an online counterpart in Day Without Weblogs (the term “blogs” wasn’t yet in popular usage) beginning in 1999, eventually evolving it into Link & Think. While many of us believed in the cause, there was a lot of skepticism about comparing blogs to art, and even more about whether a community of bloggers could raise awareness about anything. The fear, essentially, was that a day without weblogs would be just like every other day.

Instead, many media outlets’ very first time ever mentioning the new medium was in their coverage of the campaign. We’d demonstrated an ability to collectively get a message out, and I’m still proud that one of the seminal demonstrations of activism in the medium was one rooted in compassion. Brad grounded our first demonstration of our collective power with his expression of conscience.

And Brad’s example changed my life as well. These days, I very rarely get into pissing contests with other bloggers or butt heads with commenters on other sites. Sure, some of it is having grown up and become a bit more of an adult. But most of it is due to the example of Brad (and those whom I met through him) showing me that there were real people on the other end of the line. It’s one of a million little ways in which he made my life better. Some understandably want to assign a neat headline to his work, by saying “Brad coined the word blogosphere”. Though it’s technically true, the coinage was an act he thought was a bit silly, more worthy of blame than credit. He generously felt the recognition could easily go instead to those who wanted it.

Rather, Brad’s work was altogether more messy and funny and human and passionate and complicated, just like the man himself. I can offer no more succinct summation of the man than that he was a good man and a good friend, profoundly funny and profoundly kind. I cared about him and he introduced me to many more whom I care about. Brad made my work more meaningful and was there for me when I needed him. I can’t believe he’s gone.

You can donate to Brad’s beloved Repertory Theater in his memory, thanks to Judith‘s efforts. A number of us are working to preserve his work online, and Matt Haughey has taken care of keeping his web hosting going. There will be a Break Bread for Brad at South by Southwest this year. While details of venue and timing are still being settled (I’ll update this post when they’re decided), I hope all of us who had our lives better by knowing him can gather together to raise a drink in his honor.

There are many, many tributes to Brad across the web, most linked in that MetaFilter thread. A few of note to me: