I've spent a couple weeks using a new 14" Apple MacBook Pro daily (as a replacement for my last machine, which was a similar, but rather terrible, 2016 MacBook Pro) and thought it might be valuable to share a few observations that might help you assess whether it's a useful upgrade for you. I'm not usually prone to reviewing devices on this blog, but this is more a contextual overview than a proper review.

The primary thing to know about this machine, of course, is that it's absurdly faster, but not just in the "rendering visual effects" way — the biggest quality of life improvement is that apps pretty much just start instantly. You almost never see a beachball or wait for the UI to respond. Apple's accomplishment with the M1 processors is genuinely astounding, the kind of hardware breakthrough we generally only see in consumer computing about once a decade. And the Pro version of the M1 (as included in my machine) epitomizes this. It's the realization of the enormous promise that I called out at the public unveiling of the A4 processor, during the launch of the iPad. The A4 was the progenitor to the entire line of processors in the A- and M- series which now power all iPhones, iPads and Macs.

For the record, today's most noteworthy technology launch was Apple's A4 processor. Quote me on it in 5 years.

Physically, the machine is hefty. I suppose the outside dimensions are nominally the same as before, but this MacBook is so squared off and heavy that it most resembles the PowerBook models of the early 2000s. To be clear, it's still quite manageable, but it is by no means a lightweight machine.

The screen is the usual Apple standard, which is to say it's pretty much the best that you can get. I especially like the very-responsive refresh rate (Apple markets that as "ProMotion"). The most notorious part of the machine's industrial design, the screen notch, is honestly no big deal, no matter how much folks have fussed about it in their early impressions of the computer.

The most undersung part of the machine are its speakers, camera and microphones, all of which are notably great. When combined with the computing power of the M1 chip, the microphones can do astounding computational audio tricks like separating your voice from background noise (it seems a bit like the inverse of the "transparency" noise cancelling feature on AirPod Pro) and applying a portrait mode filter to your face on live video. It takes the MacBook Pro from its older versions being embarrassingly awful for video calls to now being better than even most higher-end consumer desktop webcams and microphones. You'll look good on Zoom, is what I'm saying. All of this audiovisual trickery on the MacBook Pro feels far more useful and less contrived than Apple's other realtime signal processing efforts like promoting Spatial Audio streams on Apple Music.

The Apple Silicon machines can also run iOS apps, which I largely thought was just a gimmick. But as it turns out, if you have just one or two iPhone or iPad apps that would be handy to use on a Mac, it's a nice little bonus. It's not a reason to upgrade, but it is a nice benefit for having done so.

The single biggest quality of life improvement for me personally is the keyboard. Though I knew enough to avoid the accursed touchbar on my 2016 machine, my prior MacBook Pro had the very worst keyboard Apple has ever shipped. The new Magic Keyboard is good, almost as good as the desktop magic keyboards. But I do lament that the implementation of the TouchBar has been so poor, as I've been on the record for 20 years as wanting Apple to make a customizable touchscreen controller accessory for the Mac — half a decade before I ever even owned my first Apple product.

The daily use experience is so much more pleasant. Battery life is far longer, and this is the first Apple laptop I can remember that simply does not get hot; I've never heard the fans. There are lots of prominent vents on this machine, including some weirdly prominent (not quite sharp, but definitely defined) edge vents. This focus on power consumption yields incredible results — I can easily work for 10+ hours of normal work without plugging in. And using the higher-wattage fast charger brings the battery back to a full charge astoundingly quickly. (Apple charges $20 extra to get the fast charger with the 14" model that I have; they should include it with all the models.) 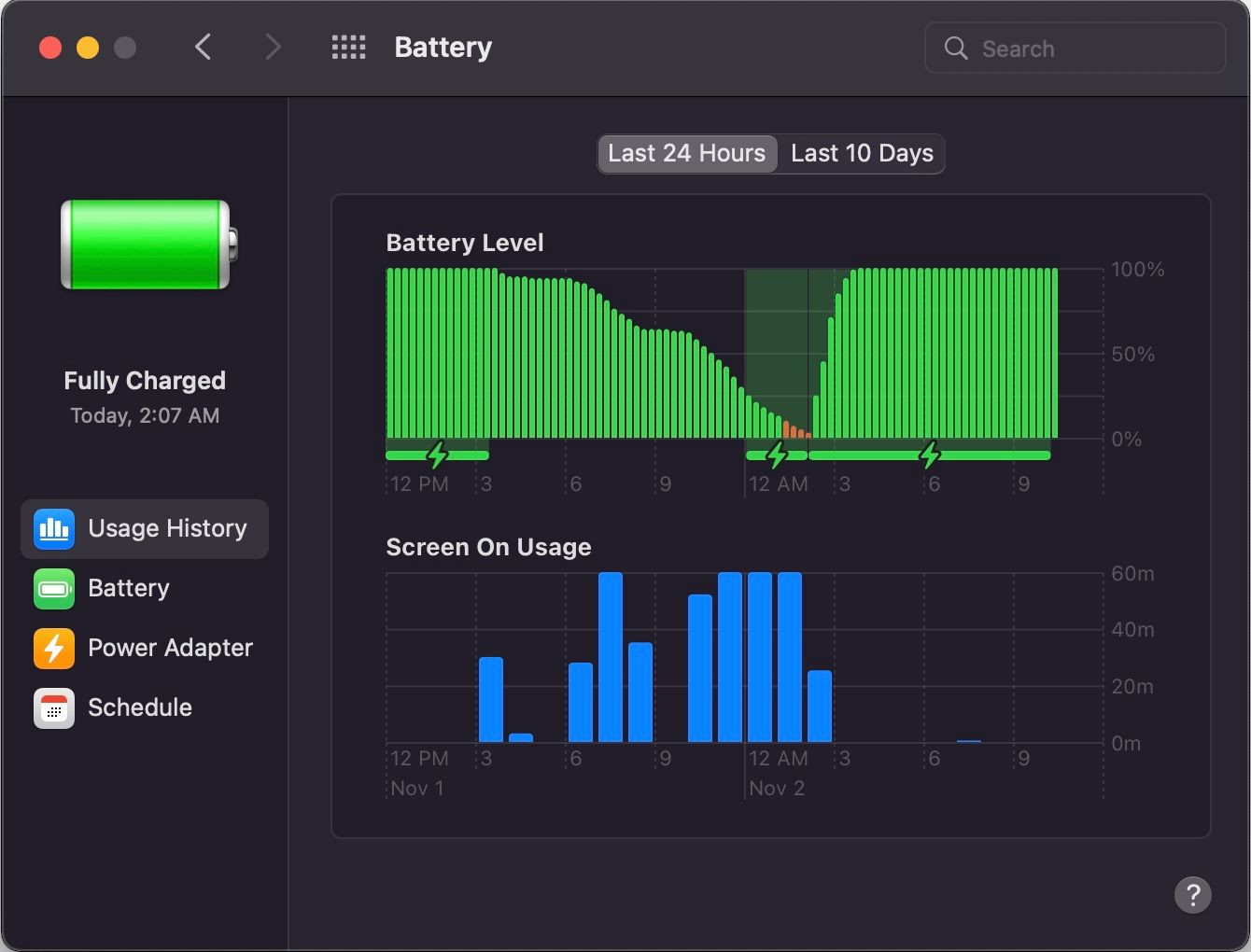 This roughly shows an 11-hour run time to a dead battery, and about 90 minutes to full recharge.

The single-core score captures how much faster it feels.

Except in the most extreme, video-processing-heavy scenarios, I cannot imagine that 90% of users need to step up to the M1 Max chip from the M1 Pro. It's a vanishingly small difference for the vast majority of use cases — basically, if you don't already know you need it, then you don't need it. Spend your money on memory or disk, not CPU.

I'm still waiting to see what the build quality is like over time. My old MacBook Pro was one of the worst Apple products I've owned (the keyboard was garbage, the battery swelled up, the camera was a potato, etc.) so I have to see how much of my very positive impression of this new machine is just like getting a glass of water in the desert.

My work computer's a 2016 MacBook Pro, and using it today without my usual external bluetooth keyboard reminded me the keyboard on these machines is truly rank garbage. (This machine already had the de rigueur keyboard replacement & one time the battery ballooned up absurdly.)

But if you are in the market for an Apple laptop, or you need more power than the Macbook Air, and your current machine is more than ~2 years old, this is a definite step up and well worth the upgrade. If your machine is more recent than 2 years, and your keyboard works, then it's just FOMO, you can wait.

Even just a few weeks in, the new MacBook Pro is one of my favorite laptop computers that I've owned.